Pakistan’s economy like every other country experienced a major hit in 2020 due to Covid-19, which led to lockdown across Pakistan. The impact is huge throughout the world as the global economy has been undergoing a recession and the GDP is estimated to contract by 3.8% - a relatively bigger chunk as compared to the 0.4% contraction witnessed after 2009 global financial crunch. The question arises here that what can be done to uplift the economy and shrug off the effects of on-going global pandemic?

Economic growth in every country entirely depends upon the significant activities taking place in a mother industry. The mother industry can be any chosen industry to exert maximum resources and efforts resulting in significant social impact. If we closely monitor the developed countries growing economies, the real estate sector along with construction sector are the most compelling economic segments that hold the massive potential to uplift the entire economy of any country.

Pakistan holds a strategic position in the region and has the potential to perform well under any circumstances. If we imply the same theory on Pakistan economy, we clearly understand that there is a large pent up demand for high quality houses and both Pakistan real estate and construction sectors have the capacity to resonate positivity. It can engage a large number of both skilled and un-skilled workers – thus solving the issue of unemployment along with generating revenue for the country, which will uplift the overall economy of the country.

The construction sector provides stimulus to almost 42 sub-sectors including brick, cement, cables, fixtures, glass, aluminium, wood, paint, tiles, transportation and warehousing. All these ancillary sectors play a huge role in creating jobs and wealth simultaneously. It is said that with the construction of every house, two jobs of permanent nature are created – either directly or indirectly. However, the peril is that despite knowing the construction sector’s huge potential, this sector’s total contribution to the GDP is slightly over 2% as compared to 9% for other regional economies such as UAE – which clearly indicates the state of this sector. 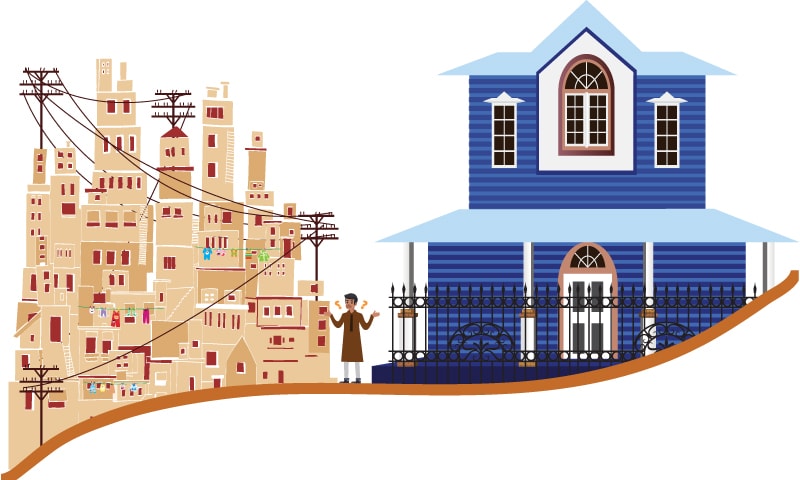 According to an estimate, Pakistan has been facing an overall deficiency of up to 10 million housing units. In cities, housing shortage is estimated to be 3.4 million housing units and in rural areas, the housing shortage is more than 7 million units. Therefore, it is clearly expected that the annual housing demand will increase from 800k housing units in 2021 to1.24 million housing units per year in 2025. Another estimate indicates that almost 40 to 50 percent of the urban population in Karachi lives in slums and it is feared that every other large city will soon be facing the similar challenge. The question is what should be done to eradicate the negative impact and how construction sector can play its role.

Government must look deeper into the construction sector All the industry professionals unanimously agree on one point that construction industry has been revolutionized and activities in this sector are also being streamlined under the leadership of current government. However, still there are a number of problems that need to be addressed on official level by the government to get the desired outcome. And the government must look into this sector as it can help country recover from the pandemic induced economic crisis. Local investors and construction industry stakeholders are satisfied with the regulatory frameworks but foreign investors who are willing to invest in Karachi, Islamabad or Lahore real estate sector always find it daunting to invest in local real estate projects.

What are international investors’ concerns?

Eighteen CEO Tarek Hamdy has faith in Pakistan real estate sector and appreciates all the efforts done so far including the tax incentives, waivers and subsidies for builders, developers and property owners extended through the prime minister’s construction package. These all things would appeal international investors which will eventually increase investment in real estate sector. “Real estate is the only sector that can guarantee rapid economic growth,” he said.

“Even in the midst of a pandemic, this sector witnessed expansion. People who had money to invest had no choice but to pour it in real estate projects as they are considered safer investment options with massive returns.” He expressed that a number of foreign investors are willing to come forward to initiate high-end development projects but government officials and policy makers need to come up with reforms that will ease them out.

The Board of Investment (BOI) must start a one-window operation for foreign developers in order to get all the required approvals from the authority instead of visiting every department separately. These all steps will help escalate the interest of foreign investors as it will not be a hurdle for them to come and initiate any project.

After the amnesty scheme introduced, different development authorities came forward to draft new building by laws. Once the new rules were announced, private developers re-planned their existing and upcoming projects followed by approvals from concerned authorities. If we look at the current scenario, work on existing and new construction projects is going on in full swing and it is expected that activities in this sector will gain momentum in the coming months.

Unlike previous amnesty schemes, where everyone parked their money in real estate to legalize the status, which resulted in abnormal increase in land prices at prime locations in all major cities. However, this time, both Pakistan real estate and construction sector are reaping benefits from the amnesty scheme. Property prices in Lahore have been observed to increase by almost 30% at the prime locations such as Bahria Town, DHA and Johar Town.

It seems like money is in full circulation in real estate sector as a number of private developers have come into the field and initiated a number of medium and large scale development projects – to legalize their money. However, the positive aspect is that these initiatives are helping the real estate and construction sector directly and indirectly to its allied sectors.

Private developers – need of the time

The government always announces affordable housing projects for low income group but for middle and upper class, private developers play crucial role in meeting their needs. Therefore, instead of relying on one amnesty scheme, policy makers must come up with a strategy, reforms or regulations for both real estate and construction sectors, which would be a permanent adage with every successive government.

If this government and the coming ones want to stabilize the country and put it on the road of economic growth then, continuity of the policies and strategies are the only fixture that can turn the construction sector into a full-fledge industry and will set the Pakistani economy on the road of growth.

This is all for now, but if you want to know more about Pakistan real estate market and its latest happenings, you can send us your query at contact@homespakistan.com. Moreover, do not forget to subscribe to our newsletter and visit our Facebook page regularly to know everything about local realty market.