A Tale about the Real Estate Billionaires of Pakistan 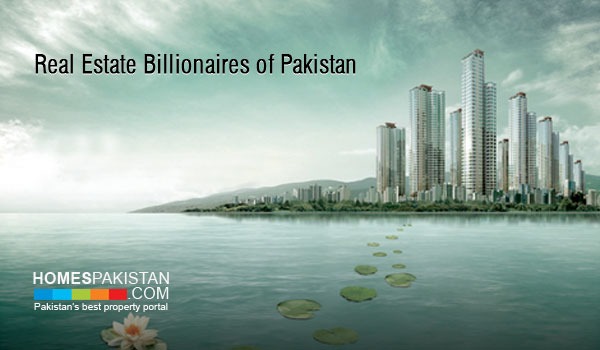 Pakistan real estate is considered as one of the best, most lucrative and recession-proof sector (let' s say to some extent) that makes it attractive and promising for savvy investors. This sector has created numerous billionaires around the world and Pakistan is no exception to this fact. Pakistan spends almost $5.2 Billion on construction sector every year and all the wealthy investors both local and overseas prefer to invest in real estate sector.

Following is the list of richest tycoons that have become billionaires through Pakistan realty sector.

Asif Ali Zardari, former President of Pakistan and richest real estate investor, is at number 1 on the list of Real Estate billionaires of Pakistan. His total fortune is estimated to be $1.8 billion with most of his land located in Nawabshah, Sindh. As you may know that he was alleged with several corruption charges, especially for receiving 10 percent commission to get the tender passed to establish a company during his wife' s administration in the country.

Malik Riaz Hussain, a business tycoon, a philanthropist and real estate developer, is known for launching a famous real estate project, Bahria Town. Bahria Town residential society has been developed across several major cities of Pakistan. His total fortune has been collectively valued around $1.2 billion, which makes him stand at the number 2 on the list of the Richest Real Estate Billionaires in Pakistan. Despite the controversies entangled around Malik Riaz, it is notable that he never stopped indulging in charities and raising funds for noble causes.

Saddaruddin Hashwani, the founder and currently the chairman of Hashoo Group, is known for his dominance in the hotel industry of Pakistan. His estimated wealth is around $1.1 billion, which makes him stand on number 3 on the list of Richest Real Estate Billionaire in Pakistan. Hashwani started his career as a trader in 1960 and hardly a decade passed, when he became the biggest trader of cotton in Pakistan. In 1973, he diversified his business by investing in hotel industry and eventually, he became owner of famous 5 star hotels in Pakistan: Holiday Inn (Marriott Hotel now) and Pearl Continental (PC).

Number four on the list is Mr. Nasir Schon from Karachi, who is the CEO of Schon Group. His total net assets have brought his riches up at about $1 billion. He is the son of an ex-pilot of Pakistan International Airlines (PIA), Captain Ather Schon Hussain. Mr. Nasir Schon started his real estate business from Singapore in 1982, which was later brought to Pakistan. The business was at its peak in 1995 but due to political crisis in Pakistan at that time, the business was shifted to Dubai.